Burts Snacks was one of the first producers to recognise consumers’ growing appetite for ‘better for you’ snacks with the release of Burts Lentil Waves in 2015. In recognition of the shift in the number of consumers looking for healthier alternatives and with one in three shoppers now opting for free-from foods, Burts Snacks introduced an improved range of Lentil Waves this year, which includes the popular Sour Cream & Chive flavour.

Sour Cream & Chive, alongside Sweet Chilli and Lightly Salted, have continued to deliver exceptional results within the vending channel. With the ‘better for you’ snacking market currently worth over £218m, Burts Sour Cream & Chive Lentil Waves answer consumers’ demand for healthy snacks, feeding their taste for adventure with bold flavours that deliver a satisfying crunch.

Burts Sour Cream & Chive Lentil Waves contain only 99 calories per packet and boast an impressive selection of health credentials, including gluten-free certification by Coeliac UK, meaning they carry the Cross-grain trademark. They’re also free-from added MSG. All three flavours of Burts Lentil Waves are suitable for vegetarians and feature bright, bold new packaging to help them stand out from competitors and excite consumers in the vending space.

As UK consumers’ needs have evolved, Burts has continued to recognise the importance of standing out from the crowd and being true to its ethos: quality, hand-cooked snacks that taste better than any other in the market.

As one of the first brands to tap into the trend for authentic ingredients with strong traceability, Burts source only the best British ingredients which are then hand cooked in small batches and seasoned with the finest locally-sourced flavours to produce crunchy and delicious waves. In an increasingly globalised market, Lentil Waves’ close association with the Devon coast is well received by discerning consumers.

With the name of the cook on the back of pack, the fun light-hearted Burts personality also shines through, while reinforcing the brand’s hand-cooked credentials.

With consumer loyalty going from strength to strength, the launch has already been embraced by all ages and its popularity shows no signs of slowing down. 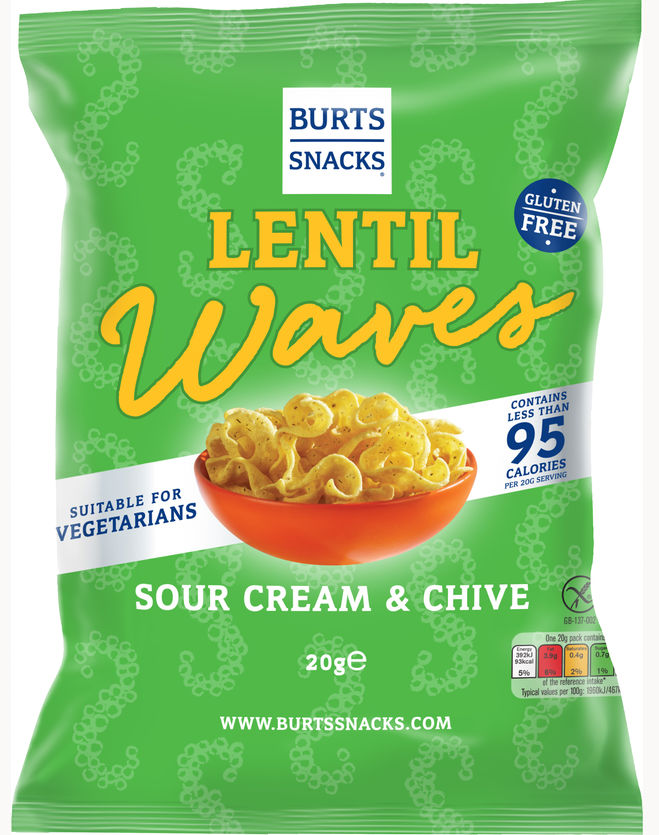